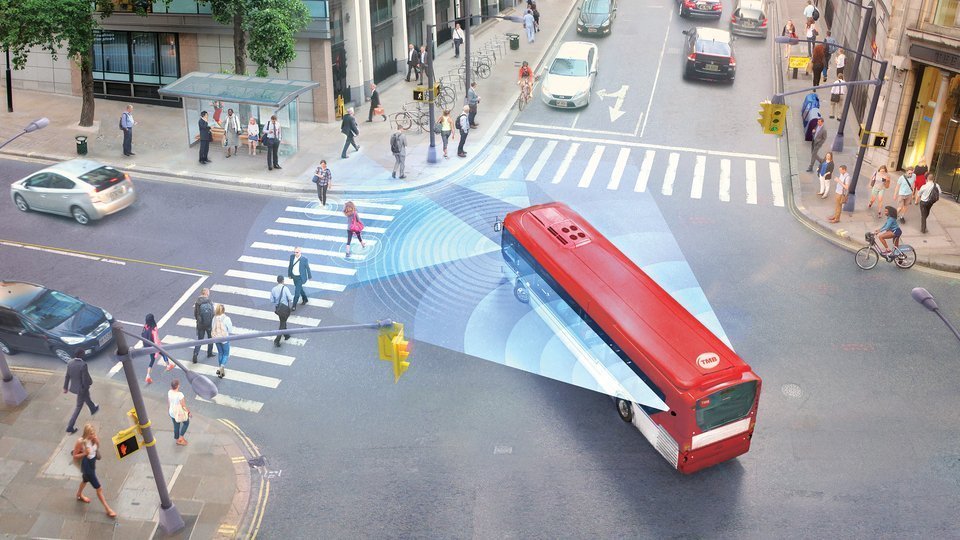 Barcelona City Council has installed Mobileye’s collision avoidance system into Transports Metropolitans de Barcelona (TMB) buses and other municipal vehicles as it looks to increase road safety in the city in the context of its 2013-2018 Urban Mobility Plan, one of the aims of which is to provide safer and more sustainable movement in the city and to increase travel by foot, bike and public transport.

Mobileye’s Shield+™ technology, specially designed for buses and lorries on urban routes, was initially trialled in two 12-metre-long hybrid buses, where it gave the drivers visual and audio alerts of hazards, including imminent collisions with other vehicles, pedestrians or cyclists. The technology works by constantly scanning the environment, including in particular blind spots not visible to the driver, even with outside mirrors. This helps to avoid situations that are especially dangerous for pedestrians and cyclists, two of the most vulnerable groups of road users. Shield+ is especially useful in this kind of vehicle, which is characterized by risky blind spots, especially in urban environments.

Shield+ comes with a full telematics system (currently provided by a third party) which aggregates data into a map showing accident "hot spots". This valuable information allows immediate infrastructure improvements to make city streets safer. The collected data from the system can then be managed, filtered and transferred to the Department of Mobility of the Barcelona City Council. The data continues to be collected as the vehicle drives along its route.

The Council had taken note of a recent study in the USA of Mobileye’s ability to reduce accidents and incidents.  Compared with a control group it saw buses equipped with the systems experience 71.55% fewer forward collision warnings per 1000 miles; 43.3% fewer pedestrian and cyclist collision and blind spot warnings and a 58.5% potential reduction in vehicle and pedestrian claims.

Since September, and within the framework of this pilot, the Barcelona City Council has also incorporated Mobileye technology ("Mobileye 6 Series") in five vehicles of the municipal fleet: one from the street cleaning fleet; one from the waste management fleet (BCASA); one from the fleet of Barcelona’s municipal services vehicles (B:SM); and two from Barcelona’s Guàrdia Urbana fleet (local police force).

The device has some of the main functions that apply to the TMB vehicles: it is a permanently active additional eye that constantly monitors everything happening on the roads, identifying potentially dangerous situations and assisting the driver in these situations

The Barcelona City Council is finalizing this pilot test with the aim of adopting this technology and eventually implementing it in future TMB buses and gradually into the entire municipal fleet. Thus, over the course of 2018, TMB will incorporate the Shield+ technology in 23 vehicles in the Barcelona bus network and equip 20 more buses with a forward facing camera system to determine how these systems can help the drivers in the city bus network.

With regard to the municipal fleet, the Barcelona City Council is working towards making it mandatory for new vehicles in the network to be equipped with this system. At the same time, a method for implementing Mobileye technology in those vehicles already in operation is currently being evaluated. The municipal fleet consists of more than 3,200 vehicles that cover all the different municipal services: cleaning, sanitation, police, etc.

"This is about making our city streets safer and we are looking to avoid situations that are especially dangerous for pedestrians and cyclists, two of the most vulnerable groups of road users in urban environments,” the Council said.

“It also enables us to gather information as the data collected from the Mobileye system can be managed, filtered and collected as the vehicle drives its route, with a view to establishing measures to prevent hazardous situations.”

Gil Ayalon, Director for Europe at Mobileye, an Intel Company said “At Mobileye we believe that a smart city is first and foremost a safe city. We are thrilled that our safety technology can now be even better harnessed by cities and mobility-providers in these new ways, to allow cities to become both safer and smarter, as well as to pave the way for the autonomous future. We applaud the city of Barcelona for taking a bold step in the transition toward becoming a truly smart city.”

By piloting the latest generation of Mobileye sensors and data analysis on its municipal buses, Barcelona aims to be a pioneer city in accident prevention, hoping to serve as an example to others.

Drivers to the Rescue – Where We Stand Today